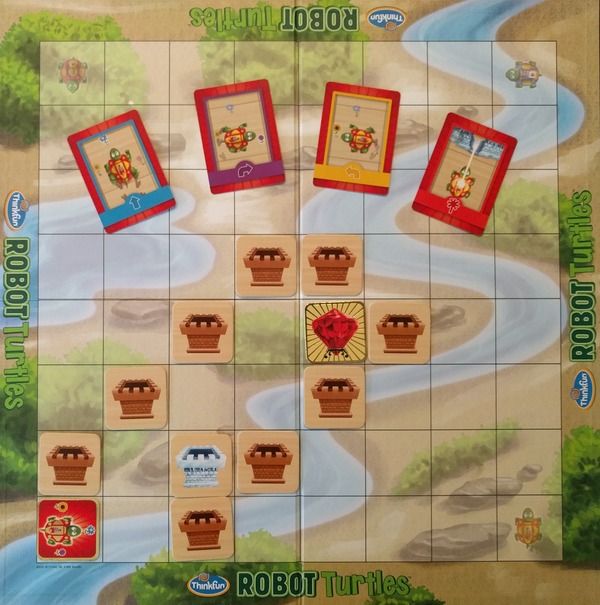 Robot Turtles is one of Theta’s favorite games. In this game, kindergarteners learn how to “code” by creating programs that move a turtle from a starting field to a diamond. Robot Turtles is reportedly the most successful game funded by the Kickstarter incubator.

In the actual board game, an adult plays the role of the “turtle master,” which is the person that plays the role of a CPU to execute the program. As you can imagine, this is a pretty boring task that cries out for automation: in this problem, you are asked to write a program that automates the task of the turtle master.

Robot Turtles is played on an $8 \times 8$ board. There is one turtle (marked with the letter T), which always starts out at the bottom-left field, facing right. The board contains empty squares (marked as .), castles made out of rock (C), and castles made out of ice (I). The diamond is marked with a D. The turtle may move only onto empty squares and the square on which the diamond is located.

A turtle program contains $4$ kinds of instructions, marked by a single letter.

The input consists of $9$ lines. The first $8$ lines contains the board, each line representing the squares in a row of the board. The turtle will always be at the bottom-left. There will be exactly $1$ diamond. The $9^{\text {th}}$ line contains the program the turtle master is asked to execute, which contains at least $1$ and at most $60$ instructions.