As in the following picture, you have a square board and you’re trying to drive some nails into it. Your nails are placed with their centers on a regular $n \times n$ grid with one centimeter between rows and columns. The head of each nail is a circle half a centimeter in diameter, and, initially, all the nails poke up five centimeters from the surface of the board. However, as you pound away with your trusty hammer you’re going to drive them in. 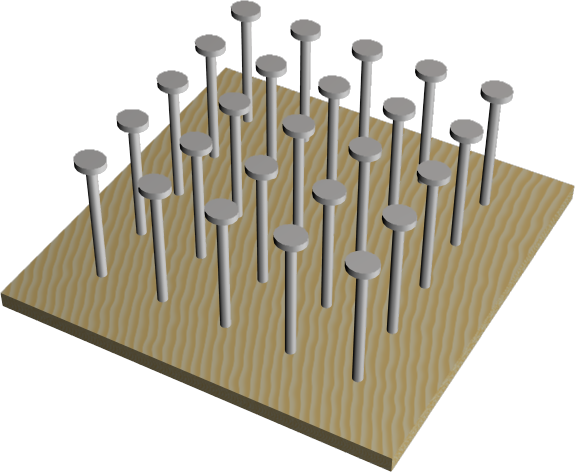 Input contains up to 100 test cases. Each case starts with a line containing a positive integer $n \leq 30$ and an integer $m \leq 100$. The first parameter $n$ gives the width and height of your grid of nails. Nails are at integer coordinates in the range $1 \ldots n$. The $m$ parameter gives the number of times you swing the hammer. The subsequent $m$ input lines give the target of each hammer swing as the real-valued $(X, Y)$ location of the center of the head, where $-2 \le X, Y \le n + 2$, and $X$ and $Y$ have at most 5 digits past the decimal. Input ends when $n=0$ and $m=0$.

For each test case, print out an $n \times n$ array of real numbers giving the final heights of all the nails. The top line of output represents nails at positions $( 1, 1 ), ( 2, 1 ) \ldots ( n, 1 )$, and subsequent rows should give heights for nails at successive values of $y$. Give answers that are accurate to within 0.001 cm. Print a single space between nail heights on the same row and print a blank line after the output for each test case.