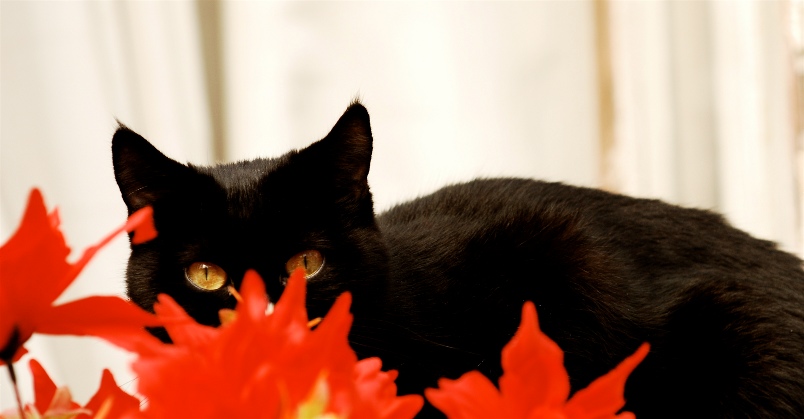 Photo by Pedro Ribeiro Simões (pedrosimoes7) on flickr
The color of a cat is primarily decided by three genes, coding for Black (Eumelanin), Red (Phaeomelanin) and Dilution (Melanophilin). The cat genetics experts among the readers will note that we are ignoring a wide range of genes, e.g., Tyrosinase and the white masking gene – we apologize in advance for the oversimplifications that are to ensue.

Black is usually written as B, Red as O, Dilution as D. In general, a cat has two copies of each gene, one from each parent (except for the red gene which is sex-bound, we’ll return to that later). Each copy can be either dominant, which we’ll denote using an upper case letter, or recessive, which we’ll denote using a lower case letter. Thus for each gene there are three possibilities: either both copies of the gene are dominant, both are recessive, or one is dominant and the other is recessive. When describing a cat we’ll write this as a pair of letters, with the second one possibly being a “-” to indicate a wildcard. For example, “bb” indicates that the cat has two recessive black genes, and “B-” indicates that the cat has a dominant black gene and that we don’t care about whether the other one is dominant or recessive.

When a cat has no dominant red (O) gene, its coat will be a variation of black, according to the following four combinations:

Now, red (O or o) is sex bound on the X chromosone. This means a male cat, or tom, only has a single red gene, while a female has two. Red dominates black, meaning that a cat having an O gene will always have red coloring. Like black, red is also affected by the dilution gene. For male cats, we have the following two possible red colors (here, the black genes have no effect on the coat color):

For female cats the situation gets a bit more complicated. If the female has two O genes she will be be red, with variations depending on the dilution gene in exactly the same way as for male red cats:

However, a female cat with the Oo combination will have a partially black, partially red, coat. These cats are known as Torties (Tortoiseshells), and named after both their coat colours, starting with the black. The four possible Tortie colorings are thus as follows:

Write a program which, given the colors of two cats, computes the most likely color for their offspring. For cats having a color where some genes do not affect the color, assume that the corresponding genes are uniformly random (over the two choices dominant/recessive). For example, if a cat is red, you should assume that the possibilities “DD” and “Dd” for the dilution gene are equally likely, and that the four possibilities “BB”, “Bb”, “bB” and “bb” are equally likely for the black gene (but note that “Bb” and “bB” are equivalent).

Output a list of the possible color outcomes for the offspring of the two cats. Each line should contain a color followed by a number $0 < p \le 1$ indicating the probability of this particular outcome.

The list should be sorted first in decreasing order by probability, then in alphabetic order by name (see sample input 3 below). You do not need to worry about the precise formatting of the probabilities (e.g., number of decimals), but the absolute error of each probability must be smaller than $10^{-9}$.